The photo-multigraph, discovered during a media-archaeological investigation into optical illusions, opened the door to an enchanted world of cloned appearances. In Verfünfungseffekt, we use the medium of video to create a kaleidoscopic portrait-in-motion where the perspective-shifting shards of ego are recorded in a synchronized performance of solipsist intersubjectivity.

Our video-multigraph allows for the compositing of tiny offsets in time-shifting delays applied to one, or several, of the mirrored selves—shattering the cloned perfection, as well as the conformity, of the multiple presences. Extreme isolation warps the brain and when you are truly on your own, the mind may push your sense of reality down a labyrinth of Kafkaesque corridors.

Concocting imaginary companions is not the mere product of an involuntary hallucination; it is a magic technique for handling the “crisis of presence.” Shipwrecked seafarers marooned on deserted islands have been known not only to anthropomorphize inanimate objects, but also to create illusory cronies to share their solitude with.

Our screen-quarantined card-playing castaway is stuck in an endless loop of auto-referencing. One starts looking for the slightest discrepancies: a movement of the hand, a finger lingering on the deck of cards a tad too long. While one’s mind is stuck on a single detail, the other versions of oneself have moved along and are now staring at each other—bewildered by the identical look on identical faces.

This optical illusion necessitates reflection on how media alters our perceptions of time and space; it thereby arouses wonder about our place in existence. 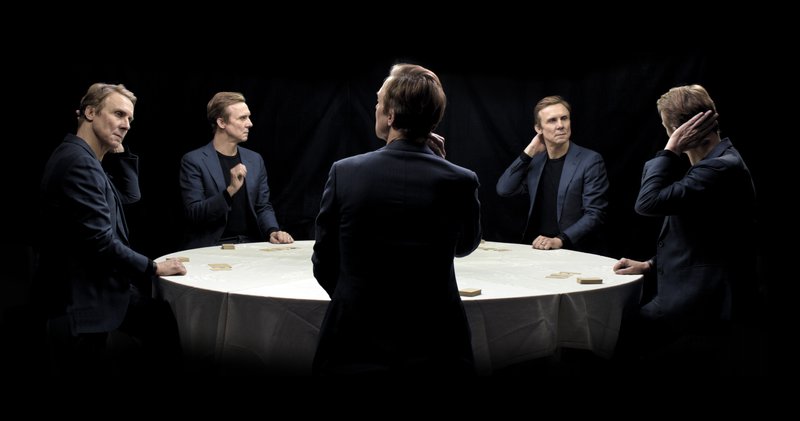 Verfünfungseffekt is filmed between two large adjacent mirrors supported on a scaffolding. The mirrors constitute two sides of a triangle—the angle being slightly short of 90 degrees in order to produce 4 reflections of the person standing inside. The actor performs at a pizza-slice-shaped table (reflected into a perfectly circular table when placed at the tip of the triangle) with his back turned towards the camera. The film is recorded in RAW format with a doubled framerate providing the optimal color and motion information for further digital compositing.

The original footage contains all five characters (1 + 4 reflections). In each scene the actor is in synchronized dialogue with the mirrored versions of himself. The fivefold-video portrait subverts the usual technological meaning of the photograph as “unambiguously capturing reality.” By multiplying the image, it instead shifts focus to “the multiplicity of being.”

The result is wonderous in itself, but this is only the first step of the processing. Using the node-based digital compositing software Fusion, the characters are masked out with the included rotoscoping tools, and then reintroduced with an individual time-remapping curve applied on each character as separate appearances, capriciously shifting between two different framerates (50 over 25 and 25 over 25 frames-per-second). Disarray between the reflections is introduced, scattering the perfect synchronicity of the mirroring effect.

Through the re-compositing of a really existing optical illusion, we apply all the conjuring techniques of a magician while creating Verfünfungseffekt: manipulation, misdirection and empathetic engagement with the audience. Lacking any of these, it would be difficult for the spectator to be drawn in and willingly deceived, albeit momentarily.